Welcome to day one of the Senran Kagura anniversary celebrations on Average Joe Reviews! If you don’t know, this is a month dedicated to all things Senran Kagura as we celebrate their 8th anniversary. Starting off the festivities is the game that started it all. Coming out of 2011 and on the 3DS, Burst marks the beginning of the titillating adventures of these buxom shinobi, but does it still hold up today?

This story is refreshingly simple compared to future installments. Before the afterlife, Youma demon creatures and ritualistic water gun fights, we got a typical good vs. evil story with a first person perspective for both sides. The plotlines converge together, slight alterations made to the story depending on the route you take. This good and evil perspective change is something I really like, I know it’s not new, but I like how this game adapts the concept. It also helps to flesh out the Hebijo Academy side and makes them more than one note villains for the Hanzo girls to fight. This story also delves into some darker themes than future games, with many backstories covered in doom and gloom, and some are just outright sinister. The plot is linear, but it’s carried by a myriad of enjoyable side stories that help to add quirks to the characters and flesh them out more. 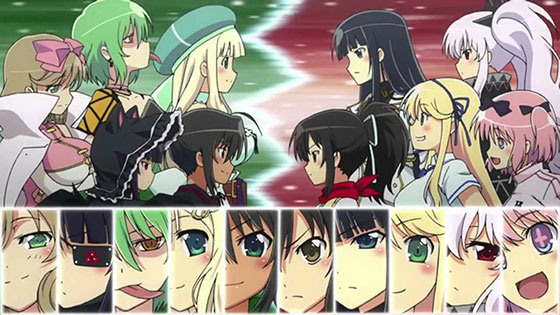 Overall, this cast of characters are perhaps at their best in this game. Not to say that the cast gets bad in the future, but the smaller collection of characters makes for more personal stories and interactions that really help to flesh out the story just right, as opposed to having too many characters with only a few who experience development.

Not including spin-off titles like Bon Appetit, Reflections and Peach Ball, this game has the most basic play style and is the furthest away from other games in the series. While all other main titles operate on a full 3D roaming style, this one operates on a smaller scale and is mainly just a straight line style of gameplay akin to a side scrolling style of game. This is a mix between a Hack n’ Slash beat em’ up and a platformer. The gameplay here is basic and pretty simple, it’s just hit enemies, defeat enemies and run to next fight sequence. The level designs are usually just flat area with different backgrounds and while that might sound boring at first, there are a myriad of items around the levels and a slew of enemies to keep you moving and add to the energy. The game is satisfying to play, your attacks fueling your transformation abilities and letting you unleash crazy super moves that have some really neat visuals accompanying them. The platforming elements could have been implemented more, making the game more than just a semi sidescroller where you only run in basically one direction. Thankfully the 3D roaming is expanded in future games, as the style feels somewhat limited since you ultimately have no reason to go up or down, only left and right. The games customisation options go only so far as cosmetic, changing costumes, hairstyles etc, but this is still fun and you unlock more clothing and other accessories as the game progresses. I do wish there were more options for customisation, but then again that can be said for almost all the Senran Kagura games. So overall, while the gameplay is basic, being easily the most linear of the franchises main titles, it’s still fun, the level design is simple but effective, and it does have an overall satisfying and gratifying feeling while playing it.

Naturally, being on the 3DS and coming from 2011 will mean the graphics look a bit dated. However, upon playing this game after a while, I realised that in all honestly the game didn’t look as dated as I thought it would. The tiny screen does limit the visuals somewhat, but the models look good, the animations and character movements are all stylish and fluid, overall the presentation was about as good as it could be for a game on the 3DS around this time. This game, like many others in the franchise, does in fact have fanservice as a core element of the presentation, but how does it stack up? Honestly it’s the basic elements we get in other games, jiggle physics that defy…well physics, ripping clothes, clothing of questionable sizes and much more elements we’re all familiar with. The game also has unlockable CG images throughout too, and they are drawn really well and have since become a cornerstone element of the franchise. But what this game shines in the most with regards to presentation is one thing in particular, the music.

Let’s talk about the Music

I know I don’t really talk about music in media extensively on this blog, mainly because I don’t consider myself enough of a music connoisseur to do so. But today that all changes because this soundtrack deserves to be talked about. I personally think this is a perfect soundtrack, everything about it is sublime. The characters themes all encapsulate the personalities and styles, different styles, instruments and genres leading to a wonderfully diverse and varied soundtrack. The cutscene/background tracks are also great, selling the tone they aim for perfectly, whether it be light hearted relaxation or deadly serious danger, these tracks work well to match the scenery. To cap off this small section on music, I absolutely love the two signature songs for the game, Skirting Shadows and The Crimson Law are both wonderfully melodic and catchy, they’re easily some of my favourite japanese video game songs. If I was to recommend any tracks in particular, definitely Homura’s themes and haruka’s themes, in fact I just recommend the whole soundtrack.

As a starting point for the franchise, this is a solid way to begin. The story and tone are consistent and enjoyable, the characters are fun and oozing with personality, the gameplay is admittedly basic but very rarely gets boring and for the time it’s a decent looking game graphics wise. Add to this a godlike soundtrack and you have a great  game to start off this series of buxom beauties and their many escapades. The franchise would abandon the sidescrolling style in the next entry, but this can only mean the games would improve too right? Well you’ll just have to wait till the Day 2 of Senran Celebration Month to find out.

And with that ladies and gentlemen, day 1 of Senran Celebration month is finished. Join me next time where I talk about Bursts direct 3DS sequel Deep Crimson. In the meantime, if you want to see Senran kagura Burst but in anime form, check out my review of Senran Kagura Ninja Flash, the anime adaptation that takes heavy inspiration from this game.

Thank you for reading i hope you enjoyed it, if you did please consider leaving a like and following my blog for updates on future posts. Also follow me on twitter @joe_reviews for further updates and general nonsense. Till next time.