Well it’s been a hot second since my last kaiju post, so here’s another one. But today we’ve got something a little different. Today we return to everyones favourite magic flying fire Turtle Gamera. The last time we touched on Gamera, it was with his final entry in the Heisei trilogy Gamera 3 Revenge of Iris. Now I know there’s another movie, Gamera the Brave, but trust me that review is coming soon and I have seen it. After seeing that movie, I thought why not rank all the Gamera enemies from best to worst. Also yes I have watched the Showa era movies, but I havn’t reviewd them since they’d all pretty much say the same thing, that they’re bad. But to celebrate the coming end of my reviews of Gamera, I’ve decided to look at his many adversaries and rank them worst to best. This will be based on a few factors;

With those rules set in play, and I’m sure I’ll break them many a time in this list, here’s every Gamera villain ranked best to worst.

Kicking off the list is the reptilian beast Jiger. I dislike Jiger for a few reasons. One: Her design is a bit too good in terms of its presentation, to the point where she looks a bit too thematically out of place when compared to the other monsters. Two: Her abilities consist of shooting spikes and impregnating her foes… OK. Not to mention she’s just so forgettable to me. I’ll definitely give her this she has one of the more unique abilities in the franchise with her impregnation needle, but uniqueness does not excuse her poor display. Sorry Jiger, if only you did more than get Gamera pregnant (in his lung) maybe you two could have had something.

The points against Zigra are almost exactly the same as Jiger. His abilities are incredibly boring and his impact on me was so little I actually forgot to put him on this list until I was image searching. Zigra is better than Jiger though for having a slightly more memorable design, and the xylophone back scene (look it up its hilariously bad) is pretty fun to remember.

Wow we are really taking a few monsters before we get to the good stuff here. Viras is probably the worst designed Gamera villain, just an alien squid with no real abilities other than spinning really, really fast. The only reason Viras is placed here is that the special effects used on its minion’s eyes were a pretty cool effect for the time. Also it’s the only Gamera villain I know of that actually talks, something you don’t really see in kaiju (unless you count that one time Godzilla spoke in Godzilla vs. Gigan).

To date, Zedus is the most recent Gamera villain, but he seems to retain much of the traits of Gamera’s older foes. Zedus looks cool, a mix between Godzilla and a Porcupine, but the issue with him is he’s not explained. The villains before Zedus in the previous Heisei trilogy were all explained in one way or another, but Zedus is left ambiguous to the point where it’s not even bought up why he’s here. Not to mention, his abilities are also somewhat lacking, his deadliest tool being a spear like tongue, which is unique just not that threatening compared to other villain weapons. So Zedus gets style points in appearance, but other than that he’s too vague to be any higher on the list.

The main antagonist of Gamera 2 – Advent of Legionand probably the weakest of the trio of villains seen throughout the trilogy. One thing I’ll definitely praise Legion on is its designs. The mini insects look unique and the final form Legion looks amazing. Not to mention they all display some amazing abilities and have a unique ecosystem built into their lore. But Legion falters on a few grounds, one being that the movie it’s in doesn’t allow for a lot of exploration into its history. The short screentime also limits how much of the monsters we see. But for what it’s worth, Legion did have some cool moments and does boast one of the cooler designs and ability ranges in the series, but it’s movie and screen presence prevents it from placing any higher on the list.

The final villain in the Heisei trilogy, and ooh boy did they end on a high note with Iris. While Iris isn’t necessarily given a reason to exist but there are many theories and each one is unique and cool. One example is that Iris is meant to serve as a failsafe created by the Atlanteans against Gamera should he become too powerful, an origin I find quite interesting. Iris follows the Heisei trilogy trend of having the ability to evolve at an accelerated pace, and it has a lot of unique designs and showcases some impressive abilities. Iris’ first form look cute but has this underlying sinister feel to it. It’s final form is an impressive beast, while the design is a little busy it oozes power and is just wacky looking to insert itself as a classic Gamera villain design. Not to mention Iris holds the distinction of one of the best kaiju deaths in history, after being gut punched by a fire fist so hard that it exploded. Seriously, Gamera’s punch against this monster puts United States of Smash to shame. I also like the personality Iris has, changing from innocent and sweet like a puppy to vicious and sadistic like a rabid wolf, it adds shades of growth to the character rarely seen in kaiju. So props to Iris for being such a cool villain, you will be missed buddy.

Gamera’s equivelant of King Ghidorah, and I’m not gonna lie, Gyaos would have been number 1 on this list, but then I remembered his first installment in the series, and then he sunk down to third place. Gyaos’ Showa design is bad, like really bad, namely because one of its main weaknesses is that it suffers from old Batman syndrome and cannot turn its head. But Gyaos from Guardian of the Universe was a fabulous monster in almost every aspect. Its modern design is creepy and insidious looking, its movement is jerky and unnerving and its sheer inability to let up as a foe all made it a fabulous kaiju for Gamera to face. I find it weird that Gamera’s number one enemy is a swarm of creatures rather than one big opposing force, but for what it’s worth, Gyaos has maintained much of its staying power and persisted through the years. Here’s hoping if we receive a Gamera remake (I pray every night for this) that Gyaos makes a return to the big screen and reasserts itself as the force to oppose Gamera’s power. 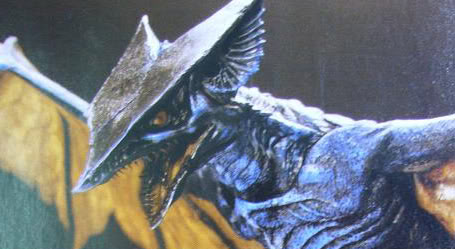 Fin Fact: The only Gamera foe to appear in more than one movie

Oh Barugon, you are so underrated for me. Barugon was Gamera’s first monster adversary and to this day is one of the best for me. When you look past the low quality of the early Gamera movies, and admire than in an ironic sense and think of them as the poor mans Godzilla. This is how I feel about Barugon, and why do I love him so much? It’s his abilities. His design is generic, but his abilities are bonkers. Any monster can shoot lasers and breathe fire, but no other kaiju I know has the ability to punch things with its elongated tongue, shoot a freeze ray from the tip of that tongue and most impressively, shoot an explosive death rainbow from its back. Can you name any other kaiju with such stupidly amazing abilities? I think not. Barugon is so funny I can’t help but adore him, not to mention Explosive Death Rainbow is a killer band name. So while he’s a bit of a stupid monster, that’s what I love about him, Barugon deserves more love and maybe even a reboot in a new Gamera movie, I’m sure he can be made serious if done right.

I can tell what you’re all thinking. You’re either thinking “Who the heck is Guiron,” or “Why did you pick Guiron.” Honestly, I don’t know why I like Guiron so much, his movie is perhaps one of the lesser in the Gamera series, but here’s a few points in favor of the knife headed fish man. For one HE’S A KNIFE HEADED FISH MAN! That to me is awesome, I don’t care how dumb he might look just the concept alone makes him awesome. What’s more, he killed a Gyaos, Gamera’s main adversary with little to no effort, that’s incredible. Guiron isn’t exactly a powerful foe, after all he has no abilities past his knife head and the ability to launch shurikens from his head. In all honesty, I’m not going to defend Guiron completely, after all he is a pretty ridiculous villain, but that’s what I love about him. He’s not special but for some reason his design and general feel is one I really enjoy and for that reason he’s my number one Gamera villain.

Thank you for reading I hope you enjoyed it. If you did please consider leaving a like and following my blog for updates on future posts. Also, please follow me on twitter @joe_reviews for further updates and general nonsense. Till next time.

3 thoughts on “Every Gamera Villain Ranked Worst to Best – Discussion”