So Senran Kagura Shinovi master has come to an end. With the departure of the latest addition to the Senran Kagura franchise, we can now look back on the show as a whole and evaluate it fully. I have done reviews for all 12 episodes of this anime (links to all the separate episode reviews will be down below), but today I want to give my overall thoughts like I have with all my other anime reviews.

The plot was a mixed bag for me. One one hand it took a much darker tone than previous games and also tried to take itself a bit more seriously, much like the previous Senran Kagura anime Ninja Flash. However it tried to be serious despite having a lot of aspects in it that were totally comedic. For instance it had magical clothes vanishing potions and a water gun fight, not exactly things that make for a darker story. By this point in the franchise Senran Kagura is incredibly self-aware so this type of storytelling is now par for the course, but the execution of that storytelling was 50/50 most of the time. The actual contents of the plot was pretty good all things considered, a revenge plot that disguises itself as a tournament plot at first only to turn into a race against time to prevent the impending demon apocalypse. The story is heavily character driven and focuses on many of the philosophies and ideals that the characters have and how they collide with one another. This isn’t necessarily a deep plot but it does keep you invested with the occasional twist, some decent overall pacing and some fun interludes that only serve to pad out the story but offer some fun moments. Senran Kagura is all about the characters working of one another and in this show that is shown in full force. While the massive collective of characters does create a certain level of stagnation at times, the interactions are tight-knit and faithful to the characters. I just wish we saw more of the smaller moments instead of primarily focusing on the larger plot that unfortunately peters out towards the end with a less than stellar ending that feels rushed, underdeveloped and doesn’t even offer much in the way of expansion of the world. So to summarise, an interesting plot that offered some unique ideas, decent pacing, somewhat lacking tonal consistency but wonderful character moments.

*inhales* Ok I’m just going to get the first part out of the way. The OP was an absolute marvel, in fact it may be one of my favourites. Scarlet Master by Sayaka Sasaki has some absolutely wonderful vocals, a great beat and tune, some fabulous solo moments and overall just feels so good to listen to. Now that that’s out of the way let’s talk about the big thing I rattled on about throughout this series, the animation problems. The animation for this show was bad, like really bad. Characters were often drawn off model, frames just looked awkward and clunky, and many long drawn out stills had some beyond poor designs in them. I don’t know why the animation looks this sloppy in places, but it is extremely distracting and while some parts of the show looks really good, and I mean damn good, the frequently poor moments really drag the show down as they take away from many scenes that could be much better. While many scenes where the animation needed to be good did have decent animation, but these few sparkling gems cannot be found among the mud that surrounds it. I don’t want to dwell any more on the animation since I effectively repeated myself for twelve weeks about why it’s bad, but to close off it is definitely the worst part of the show and it is a big problem if you let it bother you.

One one hand we have this… 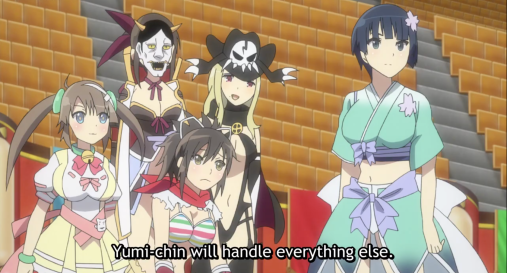 On the other hand we have this…

Yes yes we’re talking about the fanservice. Senran Kagura is an ecchi franchise, always has been and to this day still is. So naturally we should talk about said ecchi, and I must say it’s…alright. I’m a man who loves himself some ecchi, I mean I’ve been a fan of this franchise since its inception in 2011 (thinking about this means I’ve spent 8 years if my life with this franchise and that makes me feel old), so I was hoping for some decent fanservice. Most of the fanservice was very subtle and for the most part was enjoyable. I particularly enjoyed episode 2 for its fanservice and many other episodes for their tidbits of ecchi. This section will be brief since I don’t really have much to say about it, but to cap it off I shall include a myriad of fanservice shots for you all. 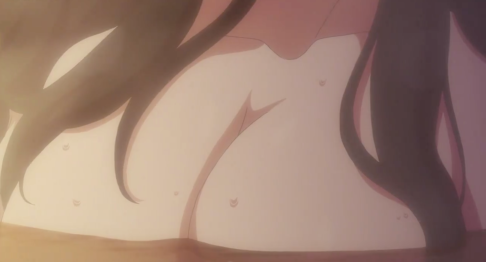 Final Grade: 3.5/5 – I wish this show was better because at the end of the day there was a lot to love here. It had great character moments, does add to the franchise both in terms of quality and lore and really does open the door to future series. I just wished it picked up in terms of visuals, because otherwise people might have liked it more. That said it is still a must see for Senran Kagura fans and lovers of ecchi alike.

Thank you for reading I hope you enjoyed it, if you did please consider leaving a like and following my blog for updates on future posts. Also follow me on twitter @joe_reviews for further updates and general nonsense, till next time.

If you want a more detailed look at this series, click the links below to see my episode by episode reviews of the series.