*inhales* I don’t wanna do this, I really don’t wanna do this. It should come as no surprise that as a Godzilla fan, I do not like this movie. Godzilla 1998 is a Godzilla movie produced by Tristar and directed and co-written by Rolland Emmerich, who purchased the rights to Godzilla from Toho. The movie came out 5 years after its announcement and was supposed to start a series, but poor reception halted the production of these sequels. The movie was panned by critics and hated my many fans of the King of the Monsters, so why did people hate this movie? Well let’s find out.

The story is one that for the most part isn’t necessarily bad, but rather it’s the characters that plague the movie that make it so lame. The plot is somewhat reminiscent of the original movies, Godzilla shows up and the military tries to kill him. But there’s one problem with it, they actually kill him. This is Godzilla, he’s supposed to be invincible, the only thing capable of killing him is another monster, and even then that sometimes doesn’t work. But no! He’s killed by missiles… So the plot is as follows; a scientist named Niko Tatopoulos *sigh*, is called in to investigate the effects of nuclear radiation, but is roped into a plot in which the military and the secret services are hunting a mutated Iguana nicknamed Godzilla. Quick note, I’ll address the whole Iguana thing later, but just be prepared for it. The story then proceeds to rip off The Lost World: Jurassic Park in which the monster/dinosaur rampages through the city destroying everything. The movie then descends into a disaster movie, both literally and figuratively, with it even ripping off Jurassic Park with a scene very reminiscent of the Raptors with Godzilla’s babies who look eerily similar to the dinosaurs. Overall, the plot is both so bland I can’t talk about it, and so overall complicated and full of subplots that I can’t mention them. The plot is just a disjointed mess, end of story. 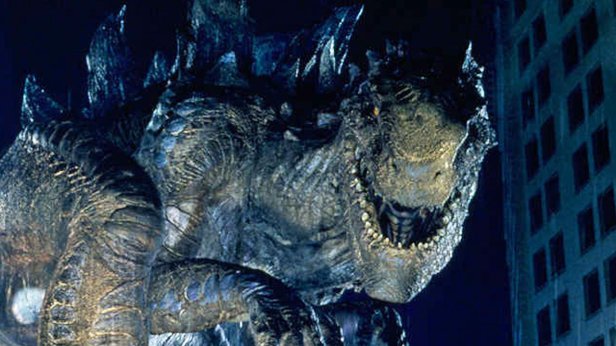 These are some of the worst characters in any monster movie I’ve seen. They’re either too stupid, to cliché or too straight up unlikeable. The protagonist is the stereotypical 90s dweeb that plagued summer flicks of the late 90s, and he doesn’t really seem qualified to handle this sort of thing. I mean he went from analysing worms to helping take down a mutated reptile that he has no real connection to. His ex/love interest is particularly despicable. She’s a budding reporter and effectively ruins Niko’s job by using his video of the monster to further her own career. Ok, main character 101 here, don’t make your secondary character, especially the love interest such a selfish and single-minded fool. She also just bumbles along in the plot, not to mention their relationship is both awkward and not really something that needed to happen in a movie called Godzilla! Everyone else is too boring to even mention, they’re either too selfish or stereotypical to even remember after seeing this movie. Honestly Godzilla is the biggest personality here, and he doesn’t even have a personality!

This movie was released in the late 90s. This was during a time when summer movies were notorious flops, rife with over abundant CGI sequences and a generally unappealing story. This movie ticks all the boxes, especially with the CGI. Godzilla is completely CGI, which was assumed from the start, and to its credit the CGI isn’t too awful, although they did include some motion capture with a suit for certain scenes. It’s about as good as 90s CGI can get, you can see the majority of the budget most likely went into making Godzilla look good. Aside from that the rest of the presentation is standard, with some flashy explosions and sweeping shots that don’t really shine brightly. Like the characters, the presentation of this movie is so standard that it isn’t even worth talking about.

‘Godzilla’ Himself (AKA Zilla)

Oooh boy, here he is. First off I want to reiterate that as of making this review, the Godzilla is this movie is officially named Zilla and is not in-fact Godzilla. After the negative reception this movie, Toho bought the rights to Godzilla back from Tristar and officially rebranded this monster as Zilla. Toho hates this thing so much, that in Godzilla Final Wars (2004) Zilla appears just to be murdered by the real Godzilla, accompanied by a sweet Sum 41 song I might add. I will be referring to him as Zilla so as to compare him to Godzilla with no confusion. So let’s get into Zilla’s design. I think that for a monster design it looks pretty good, but not as a representation of Godzilla. This creature is bipedal like Godzilla but more akin to a T-Rex than the upright standing Kaiju. Original designs depicted Zilla as a fully upright creature maintaining most of the traits we see him boat in this movie. Honestly that would have been awesome and quite creepy looking. Zilla has back spikes like Godzilla, but nothing else other than a bootleg version of his trademark roar that uses it and elephant sounds…ok. And then there’s the actual elephant in the room, his lack of Atomic Breath. Aside from the roar and the monster mashes, Godzilla is known for his Atomic Breath, and Zilla doesn’t have this. Instead he just breathed heavily on things and ignites them with gas in his breath. Kinda cool but not what Godzilla was known for doing. I will give them credit I do still like this monster, but it just isn’t Godzilla, its design, mannerisms and abilities just aren’t Godzilla material. Finally, the fact that this Godzilla isn’t a mutated dinosaur but rather a mutated Iguana really finishes it for me, of all origins why a mutant flappy necked lizard? The YouTube channel Cinemassacre said in their Godzillathon video on this movie that this monster could be compared more closely to The Beast from 20,000 Fathoms, down to it’s more dinosaur like design and rampaging through a city. I agree and for that I’d say that the movie ultimately fails at portraying the King of the Monsters. 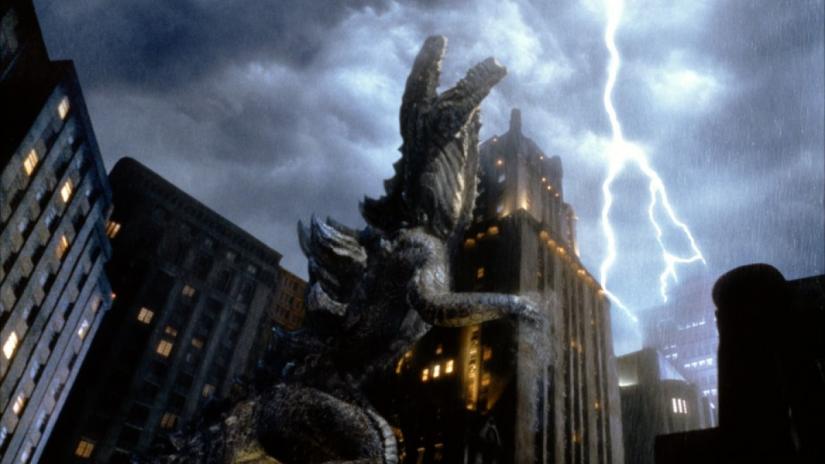